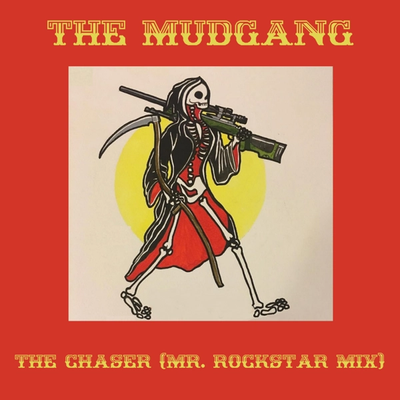 The Mudgang track ‘The Chaser (Mr. Rockstar mix) is the original track before they started experimenting with slide guitar and Indian tribal drums on the album track.

The origin of the track started off as a joke: A man, always away from home, chasing women all the time, doing whatever he likes, living in his own world not realizing that his wife is always alone at home and looking after the children, cooking, cleaning,….It was an exaggerated and caricatured picture of how things can sometimes go in some families and between couples.

Elke Van Hove, wife of leadsinger Luc Van den berghe, has a guest appearance in this track. With a heavy American accent she does an imitation of Fran Drescher from tv serie ‘The Nanny’

On the album track of ‘The Chaser’ this was left out and the lyrics got a completely different meaning.

Behind the guitar riff you can hear the E bow guitar played by Steven Janssens. It gives the track a dark atmosphere that reminds a bit of early Killing Joke. No bass or regular drum were used. Just two floor toms and one snare recorded separately.

So check out the killing joke of this track. You might recognize a situation you know from your own life.